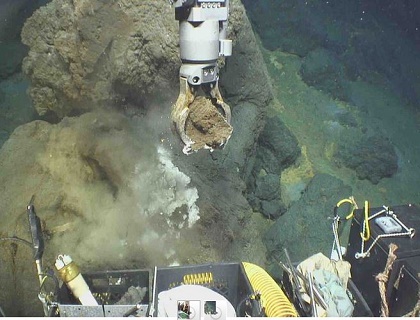 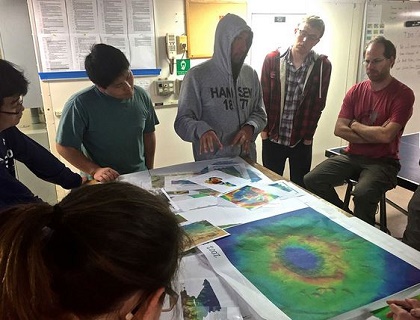 A hypothesis is a proposed explanation for a phenomenon, but a scientific hypothesis makes predictions and is testable. The MESH expedition is testing hypotheses about the origin and history of large submarine eruptions.

Because we are trying to understand the unknown, our hypotheses are sometimes wrong or, in hindsight, just misguided. In my own research on land we usually have to do experiments or carry out field studies several times to properly formulate questions and answer them. Although we begin with a hypothesis, in the process of addressing it we typically refine the question and the research methodology.This process is repeated until we have a clear question and answer.

See the official website for footage of Jason approaching an underwater camera.

Doing science at sea is different. We have only one cruise to collect data and understand how and why submarine eruptions work the way they do. We began with a clear hypothesis about the eruption history at Havre and the processes that governed the eruption. We had a well-developed plan to address these ideas. The ideas and plan must have been scientifically compelling and convincing, otherwise the cruise would not have survived the fierce competition for funding.

Almost right away, it became clear that the idea we would see only material produced by explosive eruptions was not right. Instead we also saw domes of lava squeezed onto the seafloor along with the products of explosive eruptions.

Thus began the exciting part of science. We have a team of 17 scientists debating these observations, planning new measurements, and revising hypotheses 24 hours a day. Right now this lively debate has turned to understanding what covers the floor of the Havre caldera. Is it lava flows? The products of submarine landslides? Intrusion of magma under the caldera? Posing questions and evaluating how to test them guide the day-to-day planning of where we go, what we measure, and what samples we collect.

This is why science is exciting. And science at sea even more so.