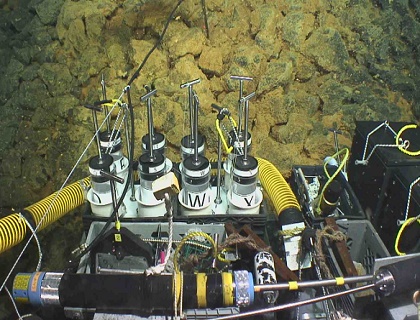 If you could take an elevator ride into the Earth, you would find that temperature increases about 25 degrees Celsius per kilometer (100 degrees Fahrenheit per mile). This change in temperature, or geothermal gradient, is normal and is primarily a result of the Earth’s continuous generation of heat from radioactive decay and the way heat diffuses slowly through the Earth’s brittle crust.

A hydrothermal vent, whether on land or under the ocean, means that something out of the ordinary is bringing heat close to the Earth’s surface. Often the cause is a cooling magma that has been injected into the Earth’s crust. While the magma may stay and solidify underground, heat from the magma can reach the Earth’s surface. Hot rock or magma warms nearby ground water, making the groundwater buoyant so that it flows up through cracks and little spaces within the rocks. When the hot water or steam reaches the surface, boom – a hydrothermal vent forms.

At Havre we’ve found several hydrothermal vents. We identify them by measuring temperature with a heat probe and observing temperature gradients that exceed the geothermal gradient. The presence of vents shows that there is still excess heat underground – possibly from cooling magma that was not erupted in 2012.

The seafloor here is not lifeless. Bacterial mats flourish around the vents we see at Havre. It might be surprising that life thrives in such deep, dark places, but hydrothermal vents bring dissolved minerals to the ocean bottom – the minerals are food for these deep water ecosystems! Life may have begun at the bottom of the ocean near a hydrothermal vent – a place where the interior and exterior of our planet are directly linked.