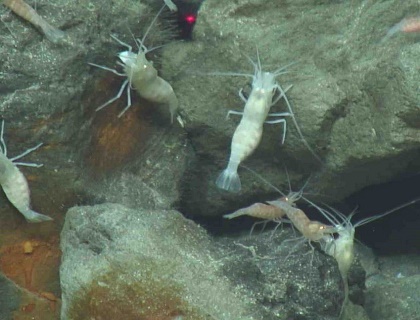 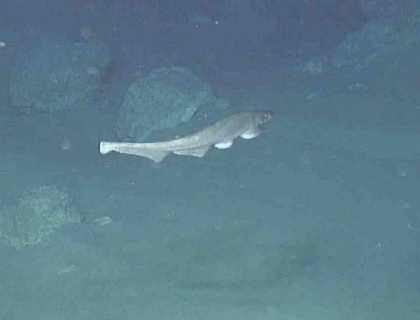 Life in the Dark

I’m always amazed by the abundance of life in the deep ocean. Even when we are focused on studying the volcanic features on the seafloor, we can’t help but get excited by seeing a squid, shark, or shrimp float by in front of Jason‘s cameras.

The range of animals we have observed on our dives so far include chemosynthetic microbial colonies that derive their energy from the chemistry of hot water venting from the seafloor (as opposed to the photosynthetic life we are accustomed to at the surface), scavengers that search the seafloor food, and animals of all types that cling to the rocks and feed on tiny animals floating by on the currents.

The animals that we find are beautiful in their methods of locomotion, their survival strategies, and their various forms, but they are also useful to us in the ways they help us understand the geology that is our primary focus.

For instance, when we were traversing a set of domes on the caldera rim, we found one that had a slow-growing coral attached to the rock. The coral indicates that that dome is much older than the others, as the delicate animal could not have survived an eruption and, in addition, took decades to grow to its observed size.

Microbial communities are a bright splash of color that help us identify places where hot water is seeping from the seafloor. The bright orange microbial mats we have found are likely a type of iron-oxidizing bacteria that have been found at other submarine volcanoes like Loihi off the coast ofHawaii. Without these mats it would be difficult to pick out vent and seep sites on the seafloor, the locations of which help us understand how the 2012 lava is cooling and how water circulates through the ocean crust.