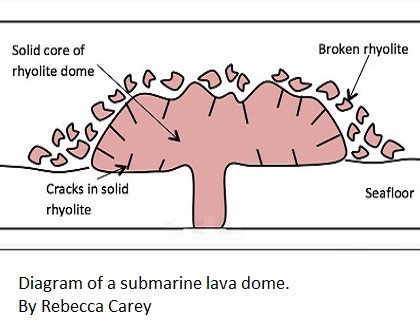 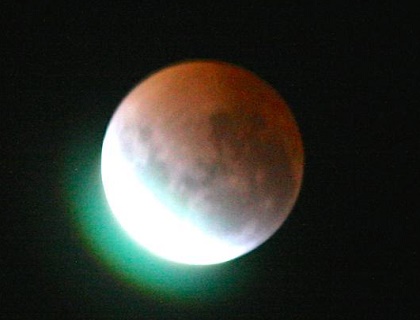 What Are Submarine Lave Domes?

This expedition was supposed to be about Havre volcano exploding in 2012 and how the huge pumice rafts we all saw were formed. We will get to that eventually, but so far, what we have found on the seafloor at the Havre is mostly new lavas.

In fact, most of the world’s ocean floor is made of lava called “basalt” (plus a thin layer of sediment above that volcanologists like to ignore). Basalt lavas on the seafloor are commonly found in thin layers or in tube-like features known as pillow lava.

Finding lava on the seafloor is no big deal, but the Havre lavas are very different from the much more common black basalt lavas. The ones we’ve seen appear to be rhyolite. Rhyolite lavas have a chemical composition that makes them very viscous when they emerge from the vent. Rather than flowing away from a central vent, the pasty rhyolite lava piles up over the vent forming a mound known as a dome that may grow to tens or even hundreds of meters high. If enough rhyolite comes out, the dome may spread, forming a short tongue of lava.

We have been using the autonomous underwater vehicle Sentry (a vehicle that can move underwater independently of the ship, collecting data) to make a very detailed map of the seafloor right at Havre volcano. The maps show that one big new dome and possibly four or five smaller domes formed during the 2012 eruption. We know that the features we see in the Sentry data are domes because we have been down there with Jason to observe and sample them.

So what do the rhyolite domes look like? They have an overall lumpy shape and close up, they look like large, jumbled piles rock fragments, twisted blobs, and jagged spires. In the words of one of the crew, they look like “a big dump of sticky concrete.” Some of the spires are as high as 10 meters, but only a few meters across. The rocky rubble is formed when the sticky lava breaks up as it quenches and cracks in the cold seawater. The broken pieces collect in talus mounds around the edges and top of the domes. Inside, the domes are mostly made up of solid or only slightly broken rhyolite.

Rhyolite domes are reasonably common in volcanic areas on land, but only a few other seafloor rhyolite domes have been found and sampled in the modern ocean. We know from the ones on land that sometimes the growth of domes is interrupted by explosions.