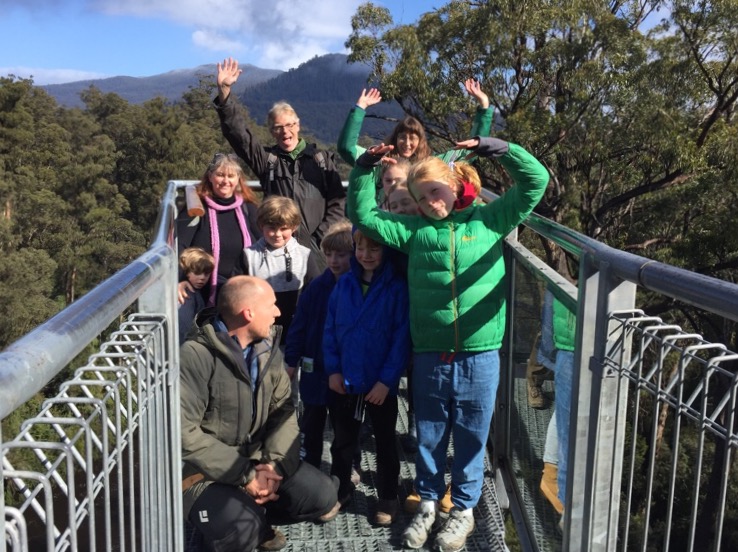 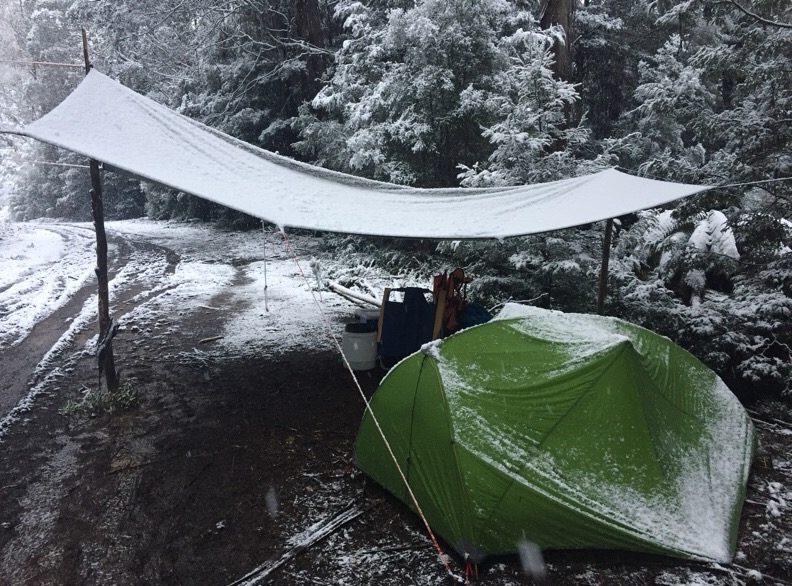 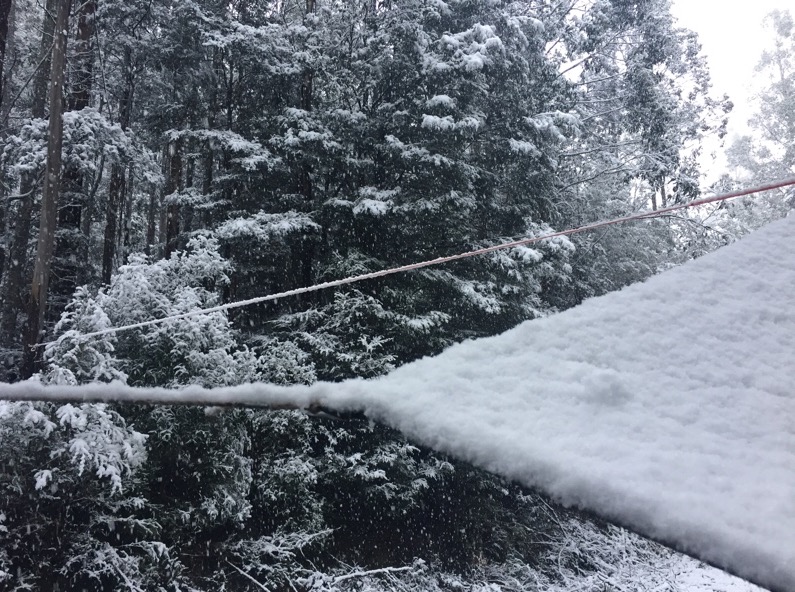 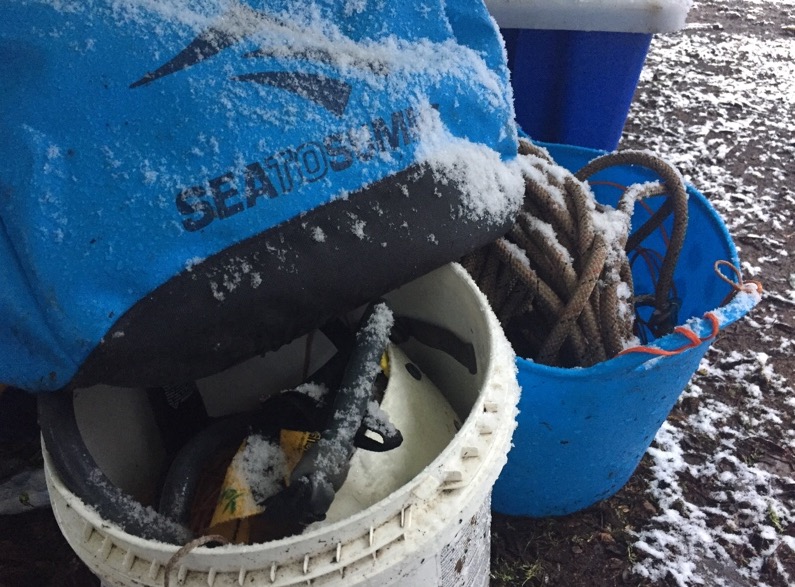 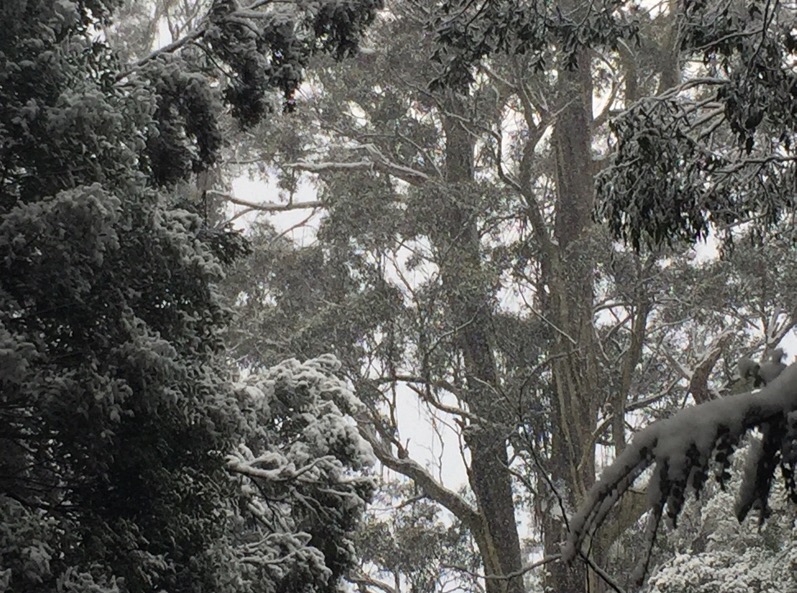 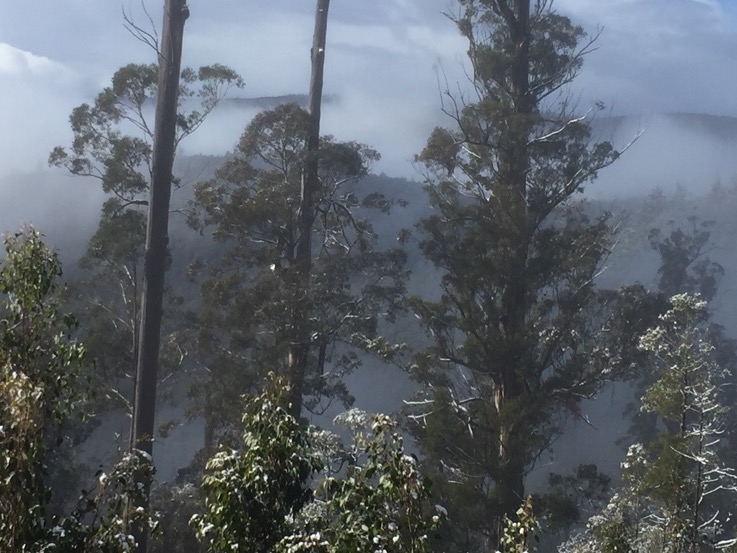 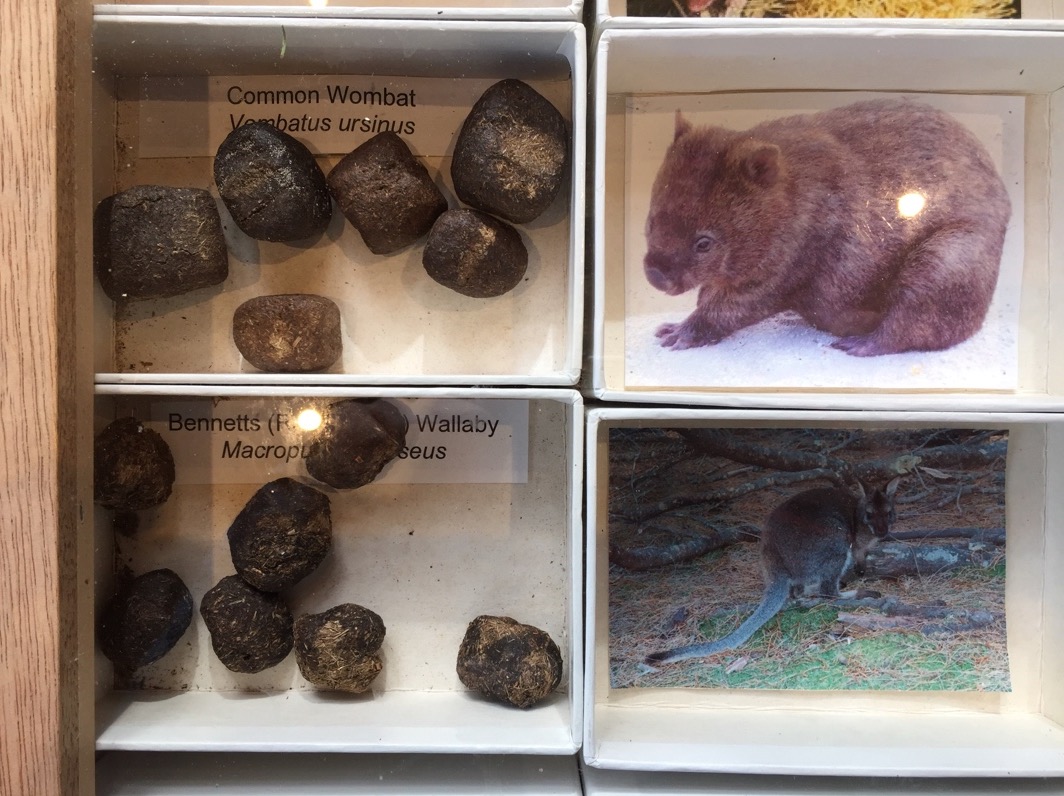 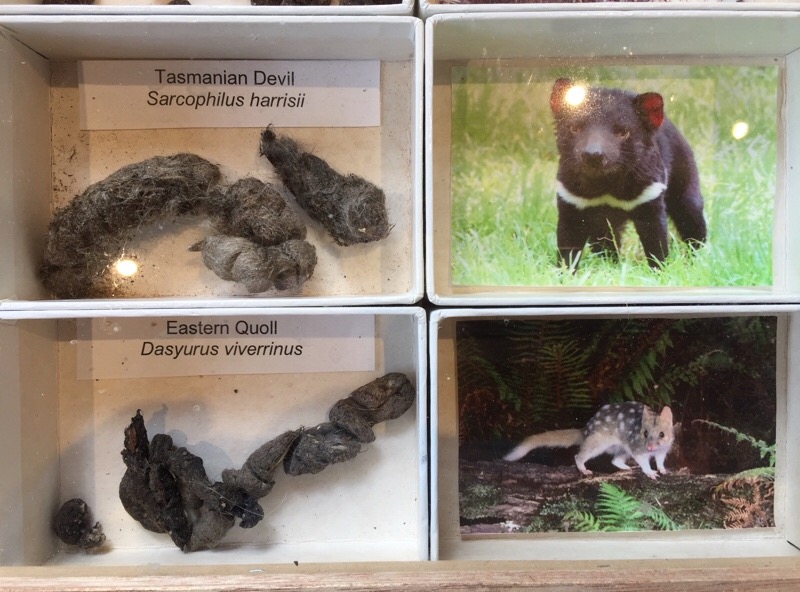 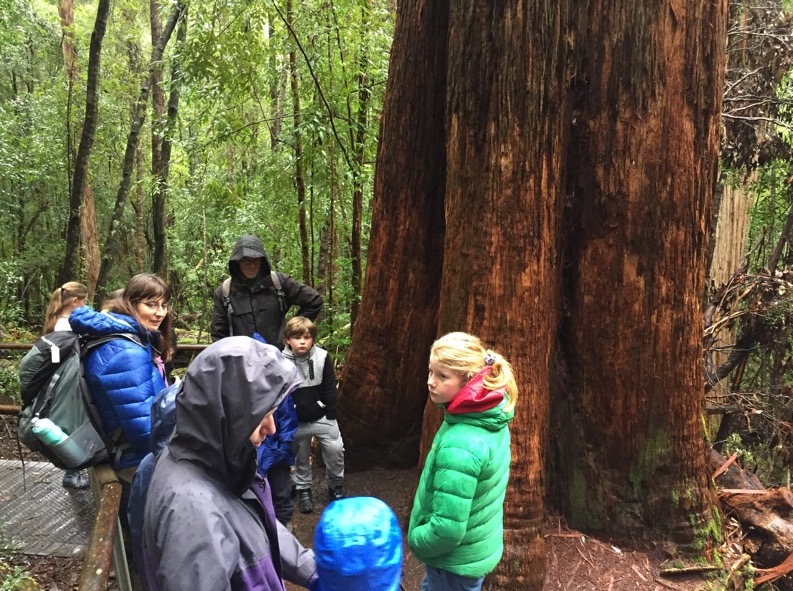 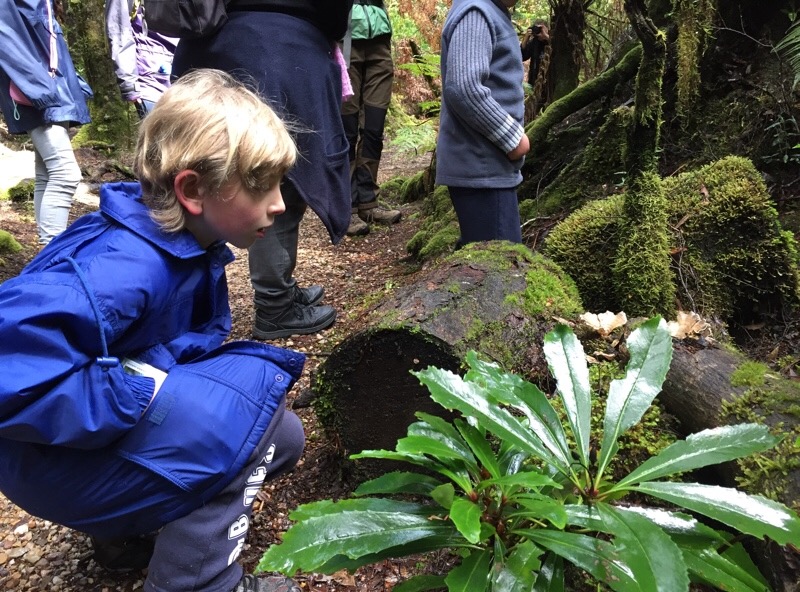 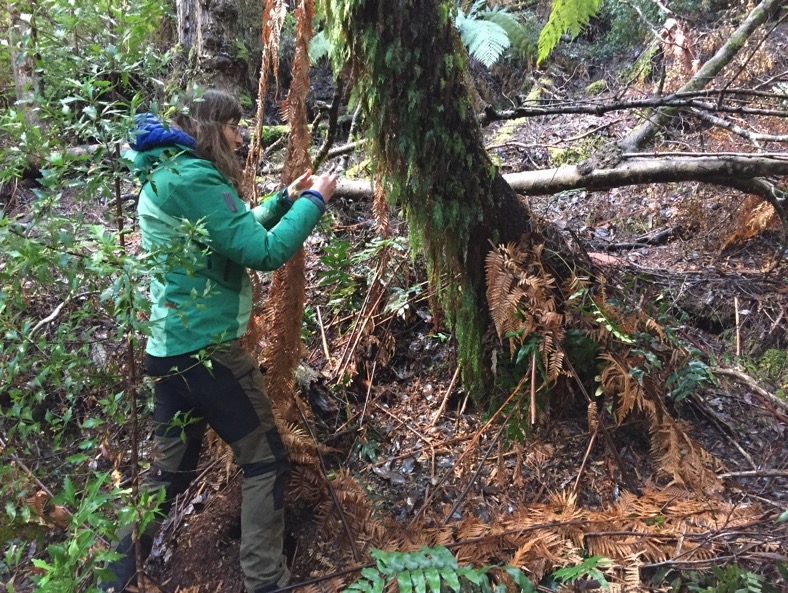 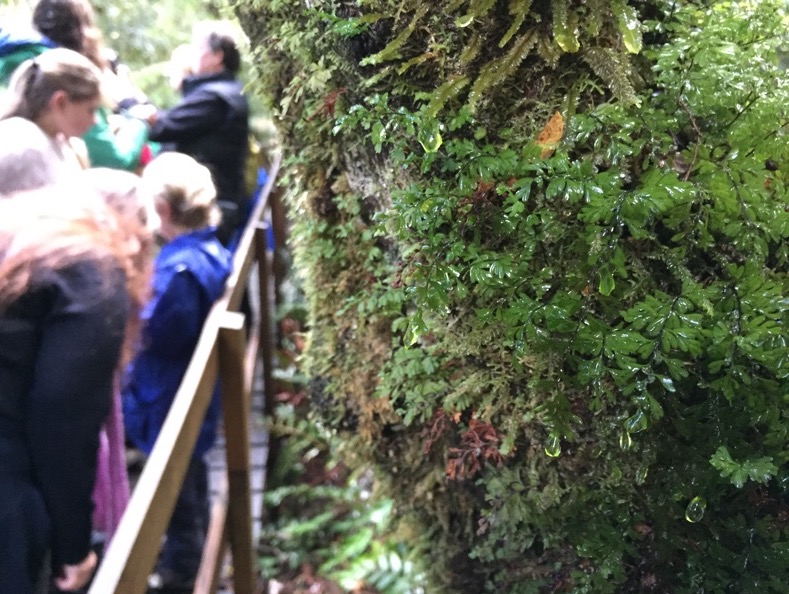 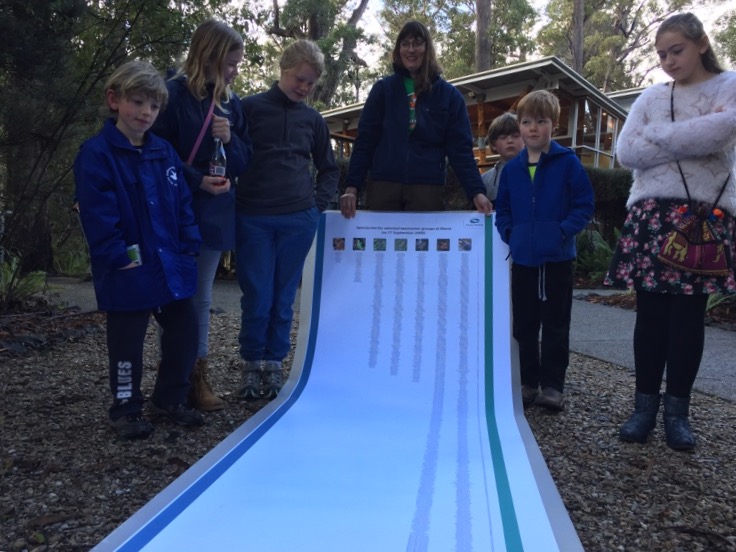 We're in the final few days of the expedition so please take a few minutes to complete a survey form, we really need/love feedback from students and teachers:

It wouldn't be a proper August expedition in Tasmania without a sprinkling of snow. We got it last night and this morning. Luckily it was also the day to bail out of base camp and head down the hill to Tahune Airwalk. We smuggled the students and their families in for a forest walk with Dr Sue.

Last night the rain stopped pinging off the tent and it went eerily quiet. When I awoke with the sleeping bag drawn tight under my chin I could hear the faint brushes of snowflakes sliding onto and down the tent fly. It took a good few minutes to decide to unzip and have a look outside.

Wowee, what a wonderful sight. The snow drifted and swirled over the road and through the forest. The tops of the tree ferns below my camp were draped with a few centimeters at least. Up on the tall trees the branches were crusted with white and the tarpaulin hung down low under the weight of the white powder.

Dr Sue messaged that she was leaving Hobart so began putting more layers of clothes on to head out to meet her. We were going to the Tahune Airwalk to meet some students and their families for a forest walk and talk. Dr Sue brought a couple of display cases (you can make these for yourself) with a beetle collection and common animal scats that are found in this area. Cameron and his family arrived first and then Daisy, Evie and their team.

We walked around the tracks and out onto the Airwalk that looks over the Picton and Huon Rivers. I explained how the dead tops of the big eucalypt trees were killed by lightning strike. Luckily Dr Sue was there to gently add that many would have just died back from old age and rot! That's one of the reasons I love doing Expedition Class, I get to keep learning new things and get new information on things I thought I had sorted out already.

The young scientists tuned in their eyes and began spotting interesting forest features. An exploding fungi here and Pygmy possum sized tree hollow there. Dr Sue brought out the Warra Toilet Roll st the end of our walk. It's a huge list with columns for how many mammals, birds, vascular plants (trees, shrubs etc.), lichens, bryophytes (mosses, liverworts and hornworts), fungi and beetles there are at research site nearby called Warra. It's surprising to learn how many species of each group of plants and animal have been found so far. Mammals have the least number species by a long way. Which group from the list above do you think has the most number of species?

I'm back at base camp tonight and preparing for the final few days in the wet eucalypt forest to finish the expedition. Tomorrow I hope to continue climbing the new tree and see how high I can get, find a few more rotting log and forest floor creatures and maybe I'll even have time to draw the forest while I'm actually in it. Maybe just a few leaf sketches anyway.

Dr Sue has taken a new interest in slime moulds during this expedition and wrote to another scientist Sarah Lloyd. Sarah wrote back:

'Sue, below is a link to a great video of a moving plasmodium. You'll probably find plasmodia in the field if you check rotting logs etc. However, if you find one under a log that's been moved, it's likely that it will 'die'. This is because they don't like disturbance, and moving logs exposes them to drier air.'