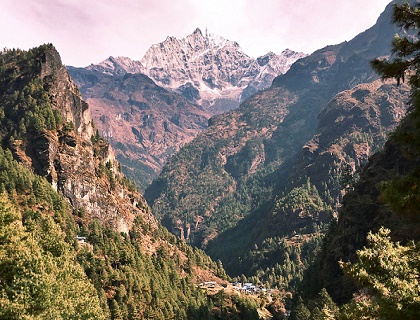 I think many of us were unsure about what to expect of Kathmandu. Leading up to the trip, our lives had been consumed by exams, and it came as a bit of a shock to me when I found myself actually sitting on the plane, descending into Kathmandu. The airport had a feel about it different to anything I’ve experienced before, and I wasn’t quite able to pin down exactly what it was. Perhaps the simplicity of the red brick buildings, the giant statures of Buddha, or the relaxed air about the airport workers who lay on the grass under the sun. Perhaps it was the idle carelessness of the man at security who waved people through, regardless of whether they set off the metal detector or not.

The drive from the airport to the Radisson hotel put a swift end to any feelings of tiredness or boredom any of us were feeling. It quickly became apparent to us that the road rules here in Nepal were not quite like anything we had experienced before, and I am genuinely amazed that I have not yet seen a collision between car/motorbike/pedestrian. Despite the scene of apparent chaos, everything seems to run quite smoothly, and we soon figured out that drivers hold their horns down not out of anger, but out of courtesy (give this a try at home and let us know what the reaction is). As we arrived at the Radisson and let out a small sigh of relief, Beth proclaimed, ‘I am never letting my mum call me a bad driver again.’

Now walking the streets, we discovered the relentless perseverance of the Nepalese people who so desperately want to sell you things. In these first encounters, I found that I was appallingly hopeless at dealing with these people, and I myself was the first victim. On our first day, these situations generally unfolded in one of two days. In one case, I would find myself stumped as to how to go about explaining that I don’t want, need, or have any desire to buy his product, so I would turn my back, ignoring his pleas, and walk away. On the other hand, I would feel too awkward to say no, or somehow feel guilty for not wanting to buy whatever it was they were selling, so after a feeble attempt at bartering I would buy it simply to stop the harassment, only to be quickly re-identified as a western tourist with money, and so the cycle continued. The former made me feel like an arrogant tool, who thinks they’re above these people (which I promise isn’t true), while the latter makes me feel like less of a man; both highly unsatisfactory outcomes.

However, I don’t think we should be worried. It’s only early in the trip, and only beginning to sink in that we are actually here.