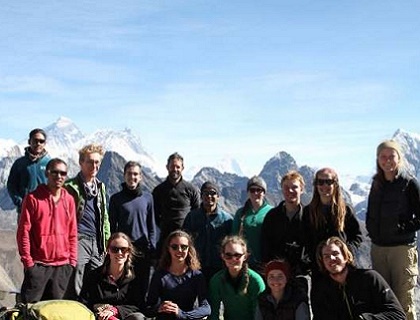 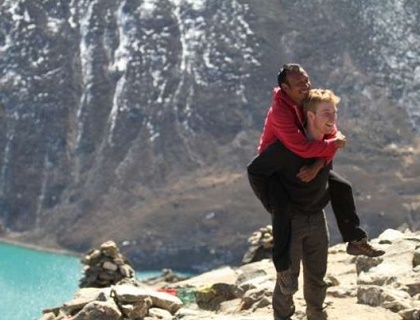 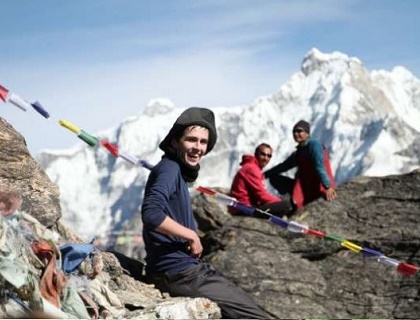 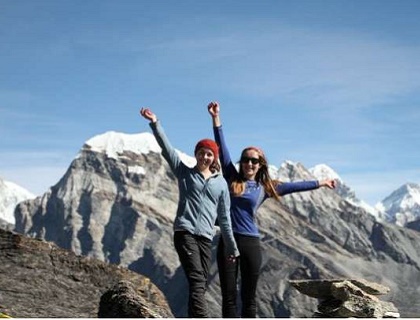 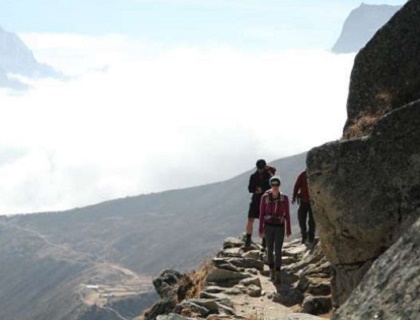 Today, the 9th day of our trek was possibly one of the most rewarding ones, with almost everyone in the team successfully ascending Gokyo Ri. We had to wake up at 6:30am, and missed the pleasure of our morning washy-washy (the only thing that remotely reduces our smells). Some members of the group were also shocked when the toilets refused to flush, because the night was so cold that the pipes had frozen solid.
Despite these issues, we set off on time, with even James Roberts being ready to walk by 8am. The trek up Gokyo Ri was amazing from the very beginning, with views of Gokyo Lakes and Very Big Mountain [2] as soon as we walked out the door. As we walked higher, we began to see Ngozumba glacier, as well as faint views of Mt Everest, which inspired us to climb higher. After approximately 3 hours of ascending, finally reached the summit of Gokyo Ri, a staggering 5357m above sea level, and this gave us a panoramic view of Cho Oyu, Everest and the lakes behind.

The trek up was no easy task, with even the fittest group members struggling to reach the summit. Fortunately, Bikash and his team made the trek achievable by allowing us plenty of rest, and even carried the backpacks of those who needed it. To reward everyone's hard effort, we spent a generous amount of time at the summit, which resulted in many great and slightly random photographs. Our descent was also difficult, because although it was less physically demanding, our calves and knees were suffering. When we arrived back at the accommodation many people were exhausted which resulted in some strange behaviour. Somehow, the James’s managed to make their window fall out, and it landed 2 stories below in a ‘bizarre accident’. Tina managed to lock Ella, Ellie and Zoe in their room leaving them stranded and calling mayday from the window.
Unfortunately, despite everyone else managing to climb Gokyo Ri, Dom was too sick to walk because of his battle against gastro. Despite this, he was much better today, which leaves open the opportunity for him to try and climb the mountain tomorrow.