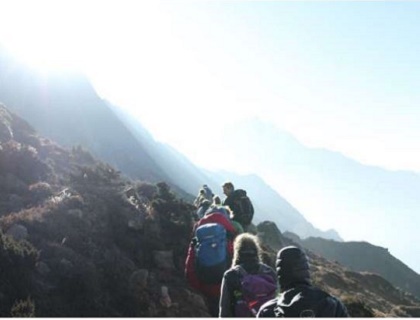 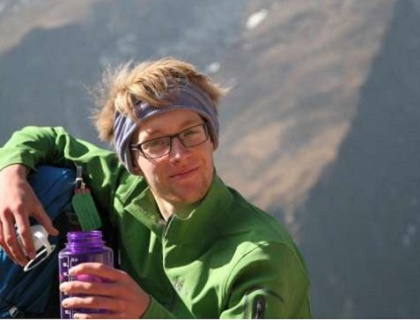 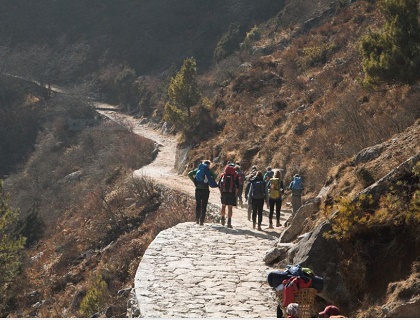 The day began as usual. We were woken with Kalo Chiya (black tea) and proceeded to pack the three-day-spread which had accumulated in our rooms before trudging downstairs to breakfast. Group morale was slightly down at breakfast and Doug felt the need to give us a bit of a pep talk.Slightly more energised we began our walk to the glacier and the sub zero temperatures froze any wet towels before we saw the moon-like landscape we were about to traverse. Crossing the Ngozumpa Glacier was one of the most peculiar experiences of my life; it looked like nothing I had ever seen before. We descended down a slippery gravel ‘track’ that had me worrying for the safety of my behind (and the camera slung around my neck). The track then winded its way up, down and around the lumpy landscape of the glacier. We stopped midway for the thrilling opportunity to throw rocks at a frozen lake, an opportunity I chose to decline (I later discovered the true pleasure of throwing stones at frozen surfaces).

Shortly after our break, Max became the first group member to be taxed and was consequently given the nickname Maxi-Taxi. We continued our slow progress across the glacier and eventually made it to the other side intact. Lunch time introduced the group to a new method of using a ‘squat toilet’. I won’t mention names or go into the gory details but it involved one member of the expedition recounting her technique which involved closing eyes, removing shoes, removing pants and placing a bobby-pin on the nose. With bellies full of Lakpa’s diabetes-filled deep fried apple-chocolate-biscuit things we continued to walk towards Thare. Doug assured us the reminder of the walk would only take 90mins and foolishly we believed him. We crossed some open Tassie style plains before ascending a narrow goat-like track into the clouds. Whilst walking, the girls practiced their synchronized sniffing (the tissue shortage is getting serious!) and we struggled through the dust. The track winded its way around the hillside past a few frozen waterfalls before a medieval looking village emerged from the clouds. After the 150min walk we were glad to arrive at our home for the night.

It had been described as an ‘eco dodge’ (not eco lodge) and this was an accurate description of the building we found ourselves in. The girls occupied the ‘right wing’ which included the luxury of wooden floors opposed to the boys who occupied the ‘left wing’ which featured tarp covered gravel floors. The group settled in for the night around the fire which produced little heat and lots of smoke. After dinner we enjoyed a quiet DJ set from James Roberts featuring Courtney Barnett, Bon Iver, Arcade Fire, Vampire Weekend and Big Scary. We went to bed feeling a sense of unity and enlightenment (and coldness).