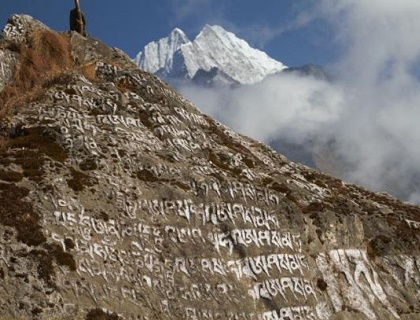 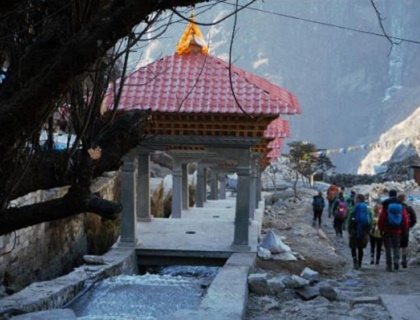 We woke at 5:15am - our earliest wake up call for the whole trek - and left the Guest House just after 7:00am to head to the Lukla Airstrip. We hurriedly weighed baggage and had it 'inspected'. Here 'inspected' means that essentially bags were unzipped and then zipped closed without anything really being checked (although a "Security Checked' sticker was ceremonialy placed on each item of baggage.

Then we waited. And waited. Amd waited. In total we waited about three hours. In itself, that is not a long time in an airport, in fact we'll spend longer than that in transit in Bangkok on the way home. The difference in Lukla is that we had no idea when we should (let alone would) fly because the planes don't operate to a schedule. Rather, Kathmandu waits for the smoke and smog to clear before planes can depart. However, before planes do depart, Kathmanmdu checks with Lukla Airstrip to see if visibility in the mountains is good enough for planes to land - once all of these things are in alignment, the planes start for the day. In total, five planes landed in Lukla in a period of about eight minutes.

The group clapped and cheered when the plane took off and we experienced a relatively calm flight to Kathmandu with turbulence decreasing significantly pnce we got out of the mountainous region.

For the last few days of trek stuydents hadn't been talking about showers and it was at the top of the list for everyone as they returned to the hotel. Unfortunately, the fuel and gas crisis that is gripping Nepal meant that the showers were, well, luke warm at best.

The afternoon was spent at leisure either in the Hotel or in Thamel, the shopping district, buying presents for loved-ones at home.