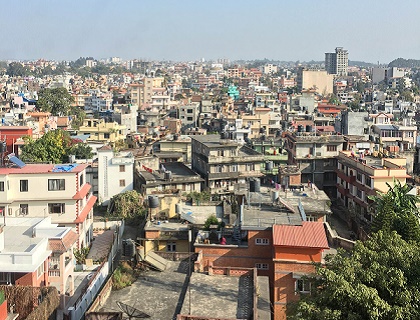 We were greeted in the morning by a well-received breakfast. At nine o’clock we met our vibrant cultural guide, who we would travel with that day to the Hindu and Buddhist temple.

We first visited the Pashupatinath Temple, a place of worship for Hindu worshippers and a cultural landmark of Nepal. Our guide was very thorough in his explanation of the temples use, history and his explanation of the background and beliefs of Hinduism. It was a shock to all of the students to see a funeral ceremony being displayed before us. The river that runs through the temple and its surrounding sacred grounds is used to wash the feet of the dead, who are carried away to crematory piles not a few hundred meters away. It was confronting to most to see the dead displayed so vividly, but the way in which the process seemed so natural to the hundreds of people gathered around the body, beautifying and adorning it with extravagant flowers and powders made me personally see the contrast in culture and manner to our own in Australia. Exploring the temple also offered us the chance to brush up on our bartering skills, as we were constantly being approached by goods-sellers. Some of us were lucky to escape, while others left for the bus with lighter pockets!

Our next stop was Boudha Stupa, another cultural landmark but significant instead to Buddhists. Unlike Pashupatinath Temple, the extent of the earthquake was apparent. The monument had sustained much damage. Our guide was good to once again enlighten us of the significance of the monument to the Buddhist faith. We were directed to an art school which World Expeditions have had a close relationship with. The teacher of the art school is an ex-monk with a degree in mathematics, who uses both of these skills to create and teach the ways of crafting perfectly geometric paintings with a spiritual meaning behind each one. All of us were genuinely interested in his explanations of the motives behind each type of painting. We came away from the school with more knowledge about the art form of mandalas and the history and beliefs of Buddhism.

We arrived back at the hotel around two o’clock in the afternoon. We went our separate ways; some chose to relax in the hotel while others set off to explore the bustling streets. At five we headed out to dinner, arriving back at seven thirty for an early night in preparation for an early morning, when we fly out to Lukla. Wish us luck!