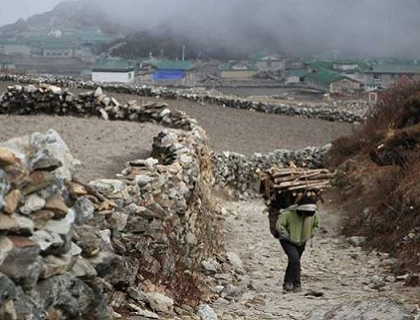 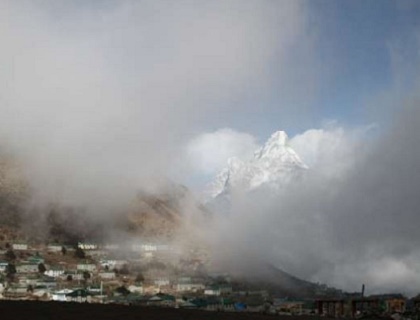 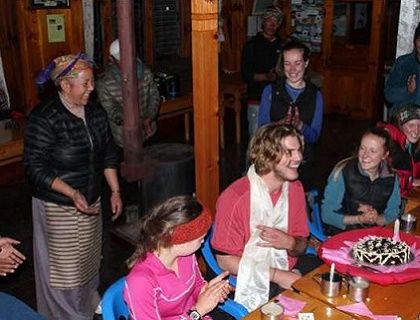 We woke up at Dole to a genuinely cold morning. According to the scientists the lowest possibletemperature is negative 273 degrees Celsius. Clearly the physicists have yet to venture to Nepal. Overnight drink bottles had become frozen and the temperature was noticeably decreasing battery life. Luckily everyone had the required layers and we had an enjoyable morning with spectacular scenery and we were treated to a splendid breakfast consisting of rice pudding, boiled eggs, and pancakes among other things.
We set off on our day trek at approximately 8:30. The start of the walk ensured everyone was at least slightly out of breath because of the steep gradient of the path. Afterward the path levelled out and we walked to our next camp. Along the way many yaks were observed as well as the dominating sight of the snow-capped Himalayan Mountains. Our next camp was situated in a town called Machermo at an altitude of 4410m. Obviously the altitude was higher than us trekkers were used to and the air was becoming noticeably thin and any small effort was met with heavy breathing. As an experiment the o2 saturations of trek participants were taken and this revealed that the altitude was taking affect although everyone was at a healthy level.

Machermo is a small town but it contains a Canadian run hospital. It is surrounded by mountains and small areas of snow can be found throughout it. It is quite amazing to think that people can live up here in the climate and remoteness especially since most supplies have to be transported up here by foot. Lunch on day 7 was as scrumptious as ever. We had tuna sandwiches, baked beans, noodle soup, potatoes and vegetables. After lunch, people spent their free time relaxing, reading or playing cards. At 3pm some members of the group went for a walk a few hundred meters up a hill with the main objective being to assist acclimatisation but, as can be expected in this area, the views at the top were spectacular. The mountains closest to Machermo were lightly covered with snow giving
them a more special feel. On top the hill colourful Buddhist prayer flags were flying in the wind and there were many yaks who seemed to fit in effortlessly with the surrounding environment. After admiring the scenery for a while the icy wind provided enough incentive for the group to return to camp. The rest of the day was dedicated to resting and ensuring we were fully prepared for the trek the next day to Gokyo of which there was great anticipation and excitement.