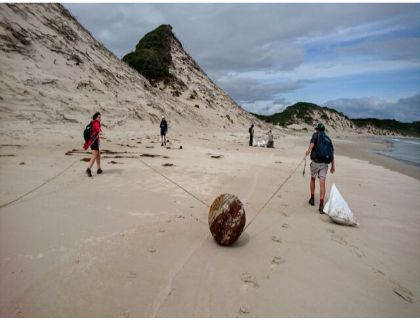 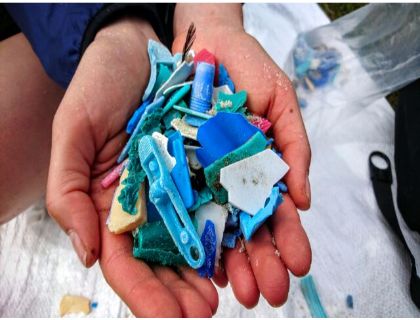 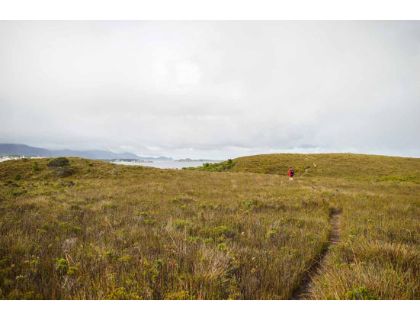 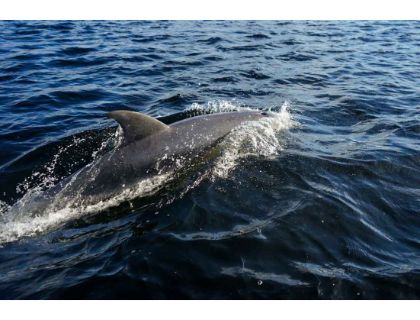 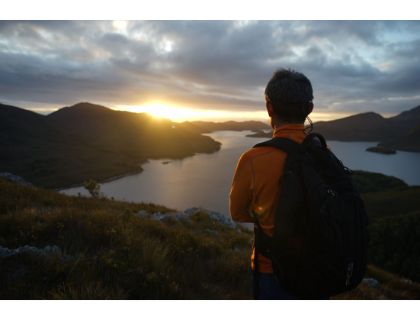 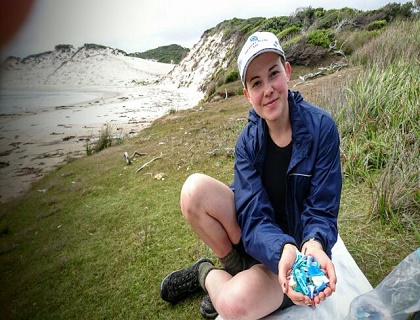 We are all a bit sore after a big day, cleaning up Stephens Bay! it was a big one, almost 2km long with a big dune behind it.

To get there we had to motor back to Spain Bay and then go ashore in the dinghy, scramble across the slippery rocks and walk a few kilometres across the mountains in the rain.

Stephens Bay is a very wild beach compared to Spain Bay beach yesterday.  We picked up a lot less small pieces of rope, instead there were thousands and thousands of pieces of small pieces of plastic (and some gigantic pieces of net and huge buoys). These were so heavy they needed to be dragged along by two people.

Oscar and Phoebe looped a rope through the biggest buoy and dragged it along behind them, I was innocently picking up some rubbish and they came in like a wrecking ball. Watch out Pat!

I went up into the mega-dune behind the beach and it was like being on the moon – except for all the tiny bits of plastic that had blown up there.

Marie is a small plastic collection specialist, she said, “Every tiny piece of plastic I can collect is one more bit that won’t end up disrupting a food chain.”

Sebastian sent in a good question about this yesterday “Do you think crayfish and shellfish are affected?”

I asked Lachy about this, he is a marine ecologist and he explained:

1. Shellfish like mussels are filter feeders. Some pieces of plastic are so small that they CAN be eaten by mussels and filter feeders, and the really small plastic pieces can lodge in their guts and block them up.
The other thing about plastic is that toxic chemicals bond to it, so the pieces are toxic too!
Even if the plastic passes through the animal the toxins end up in the shellfish’s flesh.

2. Crayfish are scavengers and carnivores (they hunt things like urchins and abalone). If there are bits of toxic plastic in their food then they end up in the Cray. If a cray eats lots of these animals the toxins build up to much higher levels

3. It’s different for each species. Marine zoologists are still working out the details.

Stephens Bay beach faces out to sea and it was too rough for the boats to come in and pick up the rubbish and so we secured the bags and nets for later pickup and started the long walk back along a VERY NICE CLEAN BEACH!

There was another stash of rubbish at the start of the walk back to Spain Bay so we all of us loaded up with lots of stinking trash and carried it back over the hill.

Once we had ferried all the rubbish back to the big boats we motored back into Bathurst Channel while dolphins played in the waves we made.

When we finally put down the anchor we counted the rubbish and climbed another steep mountain to see the view.

It was a big day’s work. I hope the sea is calm enough for the boats to get to shore and retrieve our rubbish when we are going past Stephens Bay on the way home.

Later that night Masaake played his Shakuhachi (a type of wooden flute from Japan) while the stars shone brightly. That was a great thing to do just before going to bed. We slept like logs.

Tomorrow we are heading north to a rocky beach, I can’t wait.

See you tomorrow guys. Can you do me a favour? Please tell your families about the rubbish we are finding on the wilderness beaches down here when you have your dinner tonight.