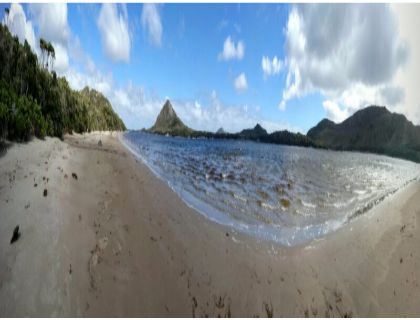 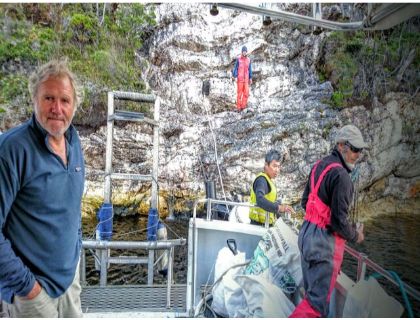 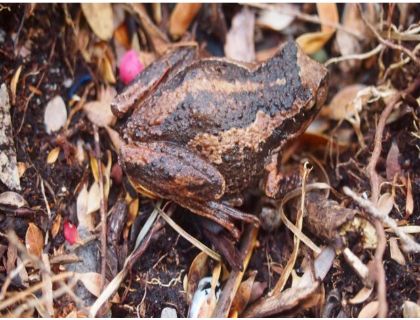 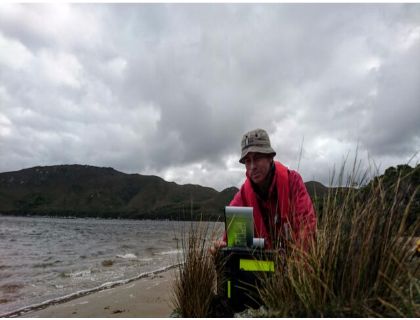 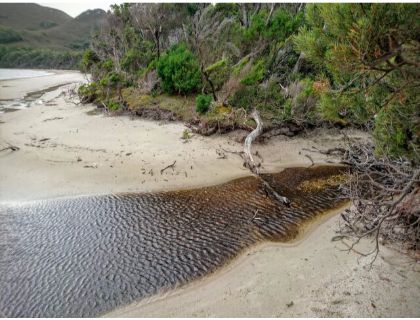 I got up at 6.30am (our normal wake-up time) but no-one was up! I wanted to make a cup of tea but that meant starting the generator and waking everyone up so I went back to bed. (Come to think of it, yesterday was a massive day, so a sleep-in was DEFINITELY in order!)

Later we woke (again) to a very windy day so we motored over to Hannants Inlet to clean some beaches.

These beaches were very, very beautiful. They have been cleaned by us before and it really showed. All up we collected about 3000 pieces of rubbish.

Ula was disappointed that we didn't find more, but I was happy because I think it shows that these beaches are getting cleaner and cleaner with every year that we visit.
Harry says we collected over 8000 pieces of rubbish from the same beaches in 2012.

Every 50-200m there was a little creek flowing across the sand. As I approached I would stare at the beautiful scene but as I got closer and closer my super-garbage collector senses would tingle and I would start spotting all the extra debris that seem to get stuck up the back of these creeks. These areas really seem to act as a wind catchment for plastic and rope! Don't worry, I'm pretty sure I picked everything up that could be picked up. But remember, lots of the debris is buried in the sand.

The creeks were beautiful but my favourite spots were the "marsupial lawn" areas, where the moss and grass mix together to make a tasty treat for larger native herbivores such as wallabies. These areas were pretty clean, however there would usually be some plastic bags and bottles stuck in the ferns behind the lawn.

Just between a lawn and a creek Lachy found a cool frog. But no one could what type it was, can any of you help us identify it?

I made you a video showing what it was like collecting all the small plastic debris off the sand in a windy spot on Stephens beach a few days ago. I had to lower the quality to send it to you by satellite so I hope that's OK! Maybe this will give you an idea of how bad it can get.

Some of you have asked about the animals I have seen: So far I have seen little penguins, oystercatchers, pygmy possum, galaxia minnows, the mystery frog, dolphins, bats, seals, albatross, wedge-tailed and sea eagles, lots of insects and a couple of invasive species (bumblebees and European wasps)

The last thing we did before anchoring for the night at Whalers Point was back the "Velocity" right up to the cliffs to get some more fresh water. There was a waterfall at this spot where some clever fishermen had rigged up a drum to catch the water and a hose to carry it out to a boat, ingenious! The only person who wasn't all that happy was poor old Harry who had to stand in the waterfall for 45 minutes.