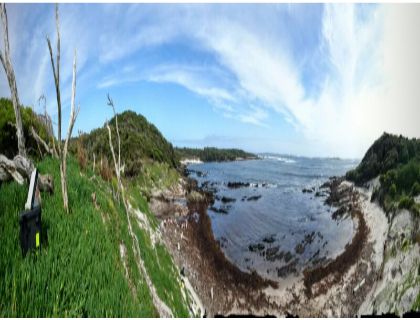 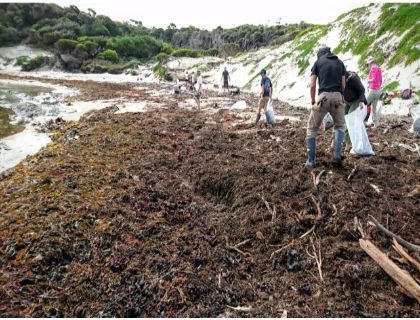 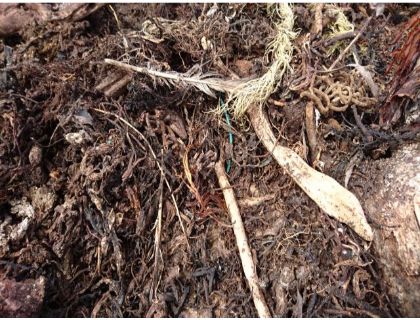 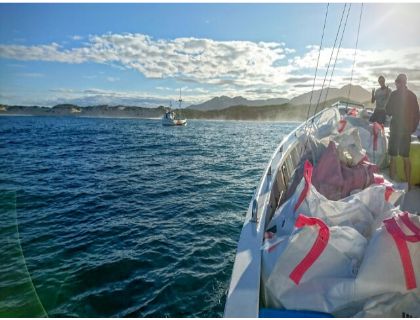 This morning the crew of the Velocity snuck away at first light again! They were keen to investigate some possible surf spots on the way to today's cleanup location.

The other two boats followed an hour or so behind, heading north along the coast towards the wild beaches near Hobbs Island.

There was a large sea rolling in from the Southern Ocean and our boats felt very small as they climbed up and plunged down the swells while the dolphins and albatross played around us. I listened to music on my headphones and it was wild.

We finally anchored just east of Hobbs Island. Lachy quickly put a fishing line in and got a bit cross when he could only catch barracouta (his least favourite fish). We all got a wake-up on the whiteknuckle zodiac dinghy ride zooming across the waves of the bay to our first beach. "Green Island main". The team has been to this small beach 4 times in the past and it is still very dirty. Ula had been telling us about this beach all week, she described how when they first visited and stepped ashore everyone was in shock when they saw the thousands and thousands of rubbish pieces threaded through the thick carpet of SLIMY ROTTING KELP that covers most of this beach.

I'm not going to pretend to be a tough guy here, it was really disgusting getting down close to the rancid kelp slop and picking out bits of rope and plastic. It was a sunny and warm and so the smell got worse and worse as the day went on. The slop was actually making a foul slimy squelching noise on it's own as it steadily decomposed. Yucko!

We hadn't come this far to be quitters, so we worked away for a few hours and pulled 18 stinking bags of rubbish off the beach. It actually looked much, much better.
I thought the funniest things were when Oscar found a number 2 (ie, a small plastic numeral) and Alecia found a plastic alien figurine with a weird horn.

We were relieved to get away from the beach and move one kilometre south to Duckhole Beach which is another beach made of stones, however beneath almost every stone is a scrap of trawl rope. We clambered around on our hands and knees for a few more hours picking up rope and a large amount of shotgun shells. It was a much nicer beach except for the Jack Jumper ants that got Lachy and I when we were pulling bottles out of the bracken ferns behind the beach.

Once we had ferried all the garbage and people back to the boats we sailed north to a pretty little bay called the Gulch (Lat: 43 07.109 S   Long:145 42.004) Where we counted all the stinking rubbish from the day.
The team counted 13,229 pieces of small plastic alone from the first stinky beach alone. A massive effort!

After a 3 hour long count we slurped down some abalone pasta dropped into a deep sleep after a very, very long day.

....and then the mosquitoes arrived..