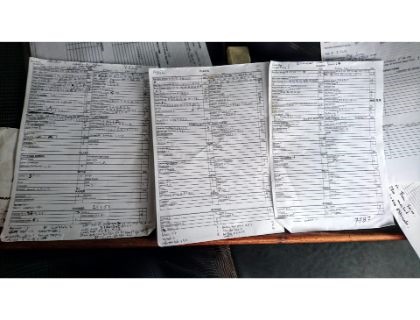 Last night we steamed south after the rubbish count and anchored in North Stephens Bay.

Today was all about the return voyage but first we had to retrieve the rubbish we had previously stashed down the southern end of Stephens Bay beach way back on the 7th March.

Once again it was quite a mission getting the heavily laden dinghies in and out through the waves.

The deck of the Wilson’s Voyager is now completely covered in garbage (tied down of course). Three gigantic crane bags of ropes dominate the space. All up we have close to three tons of rubbish.

Have a look at the photo of some of the recording sheets filled in every night this week.

The process worked best when one person was the count recorder, whose job was to write down all the sub-totals that were called out by the rest of the team as they sorted through the day’s rubbish.

They would then add all the sub-totals up to get our daily totals.

As you can see I have not been telling you making all this up! Most of the beaches we visited were heavily affected by small plastic pieces.

But lets look at what we have achieved over the whole week.

We have just added up all our counts collected 80 694 pieces of rubbish over the last week – a new record!

Ula in particular was stoked with this result. We had a long day of steaming ahead of us so we set off at about 10.30 am. It was great to watch the gigantic cliffs of southwest cape slide past.

We took a quick detour to hook a big fat stripy trumpeter for our dinner and steamed on straight through the narrow gap south of Maatsuyker Island, hooked around Southeast Cape and then anchored in beautiful Recherche Bay for the final garbage count.

While we counted the cooks and their assistants started preparing the ultimate feast from the fish and all the bits and pieces of food that had been knocking around in the eskies all week.

After a big party we all went to bed feeling satisfied knowing that we had left behind some very, very clean beaches in the Tasmanian Wilderness World Heritage Area.

I’ll say it again: we collected 80 694 pieces of rubbish over the last week – a massive effort!

I feel like we have made a big difference for now, but it is just one of many actions that need to be taken for our wild oceans and beaches to become cleaner places.

“But Pat, what about the rubbish still out there buried under the sand?” or;

“What about the rubbish floating around in the ocean that soon will wash upon the same beaches?” and even;

“Isn’t the area is in a National park and doesn’t that mean that it is the rangers job to look after the beaches?”

Well, yes, marine debris is a big, complex problem and it would be easy to see this job as being hopeless or too hard when people ask questions like these.

But it is something we cannot ignore because we are all custodians of our wild places and our oceans. (A custodian is a keeper or guardian of a place.)

As custodians we have to start somewhere and we have to be smart about what we actually do to help.

That’s why we have been recording all the rubbish types collected so we can identify things that can change and pass that information on to the decision makers and leaders of our land.

Have you ever read “The Lorax” by Dr Seuss? I hope so because I am going to end with the last words of the Once-ler,

"Now that you’re here, The word of the Lorax seems perfectly clear. UNLESS someone like you cares a whole awful lot, nothing is going to get better, it’s not" Dr Suess

I have to rush back into everyday life now (back to school tomorrow) I'd like to say thanks to the following people and organisations for their efforts and support:

Special sponsors and supporters of the SWMDC including Wildcare Tasmania and Patagonia.

[Pat, until you send me a better pic I'm leaaving this joke profile pic you sent through before the start of the expedition... and well done everyone online and on the boats!- Andrew]