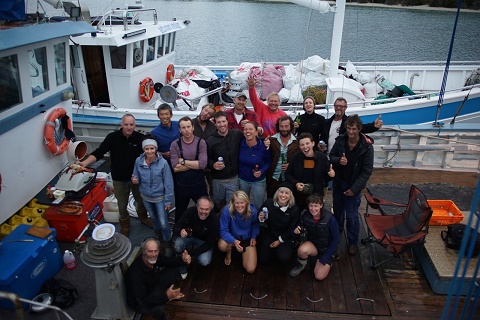 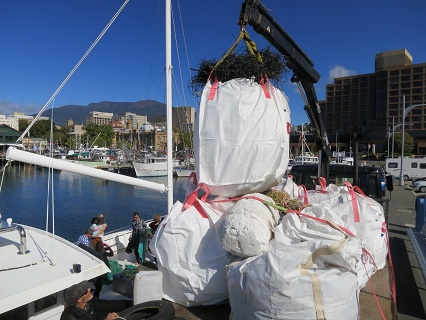 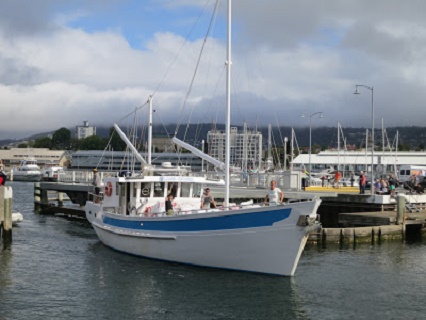 Pat is Back in the Big Smoke

The final word from Pat Spiers

Well, I'm back in the "big smoke" (Sydney) after a whirlwind 9 days in Tassie and my friends and students are saying things like;

Well, it was a very busy time and there was no time to shave on the trip!

"You look so happy but why are you covered in scabs?"

The Tasmanian bush is really scratchy and I spent a large part of the week burrowing under spiky bushes to retrieve rubbish!

"Did you really pick up that many little bits or rope and plastic in those wild places? But I thought they would be pristine and untouched!?"

Well, yes, we DID pick up all that rubbish thank you very much!..

to be re-used, recycled or disposed of:

- The good rope was re-used for fishing and art

- The bottles plastic pieces, and aluminium cans were recycled

- The remaining rubbish that had no future went into landfill at the tip.

We have also added to a detailed picture of what has been washing up on these beaches over the last 16 years. “See the dirty dozen” pie chart HERE>>

Over the years we have seen changes, for example recent clean-ups have been picking up many, many more pieces of small plastic.

Question for students: What are some things that we can all do to limit the amount of plastic debris breaking down into small pieces on our beaches?

Another strong memory that remains stuck in my mind is THE ROPE. There was so much of it and it was obvious most of the bits and pieces or rope had been worked on by someone, eg they had been knotted or spliced and then cut and THROWN OVERBOARD. But by who?

I know all local Tassie fishermen are pretty good with obeying the "Stow it - don't throw it" rule, so that means the culprits could be the crews on the big industrial sized boats that fish in deeper international waters, often with trawl nets and long lines.

(Do you remember I talked about this in my post on Day 4 -Tuesday 8 March)?

Now, some of this gear may have been lost in storms or washed overboard accidently, but I think we definitely picked up a lot of cut-off gear that could have been lazily tossed into the water by these guys.

Another question for students: How do you think we can get the larger fishing boats to stop throwing away their bits of broken nets?

I have to go now (it’s raining heavily here in Sydney and I go and help some high school kids who are doing biology investigations in a swamp!)

Thanks to the Bookend Trust, Alcorso Foundation and the Australian Science Teachers Association for choosing me to be the embedded teacher on the 2016 Southwest Marine Debris Cleanup expedition.

This is Pat Spiers SIGNING OUT!

[Thank YOU Pat for the effort in reporting back to us here at Expedition Class. And thanks to Matt Dell and his hearty crew of volunteers for making their adventure a wonderful learning opportunity for all of us. Students and teachers can continue to use these reports and linked learning pack in their classroom investigations into marine litter and coastal issues. We'll leave the discussion boards open for anyone with follow up questions. We're doing it all again in 2017 so if you're an adventurous teacher sign up to the e-newsletters (in the footer) for an alert when applications open later in the year.- Andrew]