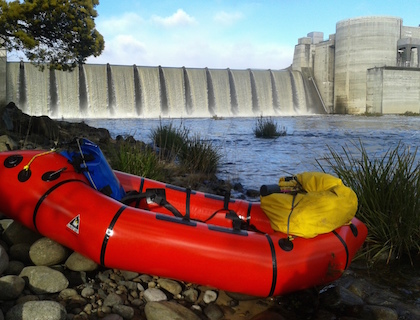 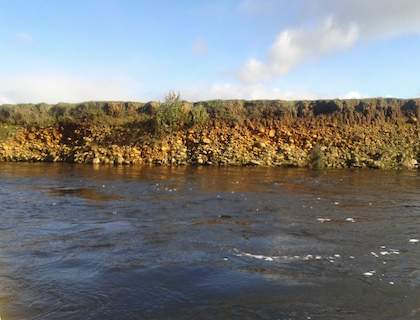 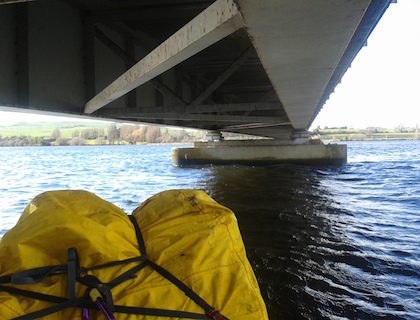 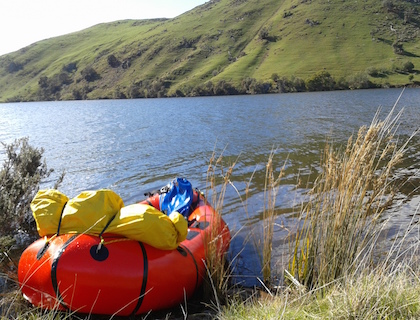 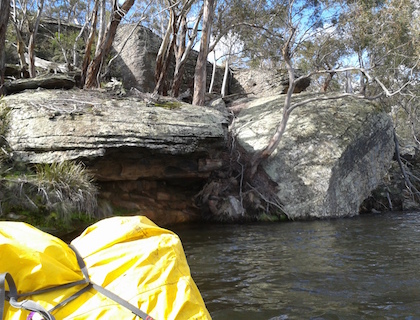 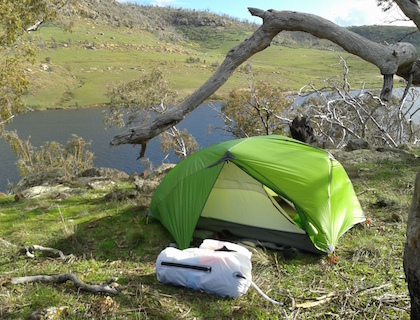 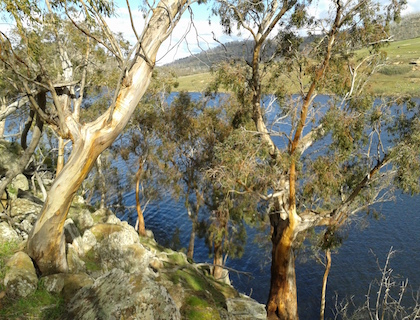 The Cluny power station spillway looked less energetic than the last two. I guess with no recent heavy rain the levels are settling down? Anyway there was still a strong flow heading down to Lake Meadowbank. Dave the Ruby Currant twisted and turned on the low rapids and roiling water. The only heart in mouth moment was going over the rock weir before the lake. It's a graded drop of less than a meter but with the volume of water there was a deep hole at the bottom before the water reared back up as a standing wave. Crunch, I went down, pulling the paddle hard to stay straight.  Through the first wave and then bang into the second slightly askew (crooked) and I felt Dave rear up and try to tip me out. The paddle saved me and onwards to calmer water.

In the bank you might be able to see the rich floodplain soil laying over the large rounded river rocks. The size of those rocks tells us the river has had lots of energy over the centuries.

I had the number of local farmer Jim Allwright so as I floated under Dunrobin Bridge I gave him a call. Jim has land that runs up to the lake (the last Hydro dammed lake on the river) and has been farming here since the early 1980's. He explained that in the area there were a few dairy farms that supply much of Hobart's fresh milk. It gets taken down in tankers to the processing plant in Lenah Valley and then shortly after that ends up in your fridge! Jim also mentioned that although the soil is not as fertile as somewhere like northwest Tasmania, there is irrigated cropping, wool production, vineyards, hops and plenty more to keep the local farmers busy.

Farming can have an impact on water quality as well. New ideas to keep the catchment clean are something Dr Josie works on with the Derwent Catchment NRM. If you think of a question about farming and water quality Dr Josie is standing by. Oh, and I saw 3 platypii (is that the plural of platypus?) on the river section today. I also learned a lot about rabbits thanks to your excellent research!

Immediately below us was the first serious obstacle we had met. For a quarter of a mile the river roared and tumbled amongst huge rocks, falling at least 100ft. It was a magnificent piece of river from a scenic point of view but for a canoe it looked at first sight absolutely impassable. However, we has already learned that there is generally a side track somewhere and that the fiercest bit of river is, often by comparison, tame along the edges, and at the worst we could always unload and carry the gear in relays, then skid the canoe on spars over the roughest places. We were still rather green horns at canoeing and in trying to put her through a bad place without unloading we came to grief. A hidden rock caught in the keel, over she reeled and in a moment was full of water and jammed hard and fast between two rocks with the full forces of the whole river, rushing through an opening not more than 10ft wide, beating into her.

As quickly as possible, up to our necks in water, we unloaded and tried to prise her out. Our biggest efforts with levers failed to move her an inch and things began to look very black with the canoe bumping badly and threatening to break up under the terrific pounding she was getting. In desperation I rigged a windlass and with a stout rope we had providentially carried, in addition to the ordinary then rope used for lining the rapids, we hauled her by main force out of the water. How she stood the strain and came out of place practically undamaged is a marcel to this day and speaks volumes for the honest work put into her by Westerway. It was about 1130 a.m. when we came to grief and it was 2.45 p.m. when we had her on an even keel and could bail her out.

On Friday, this week, we will be giving away the Royal Life Saving Society's generously donated swimming lessons ($160 worth). To be in the running get posting on the discussion boards THIS WEEK - everyone's in for a chance.