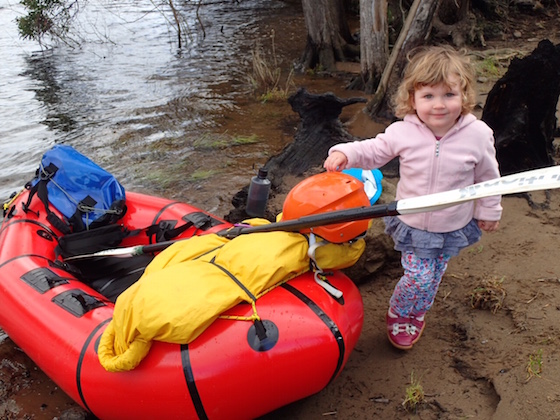 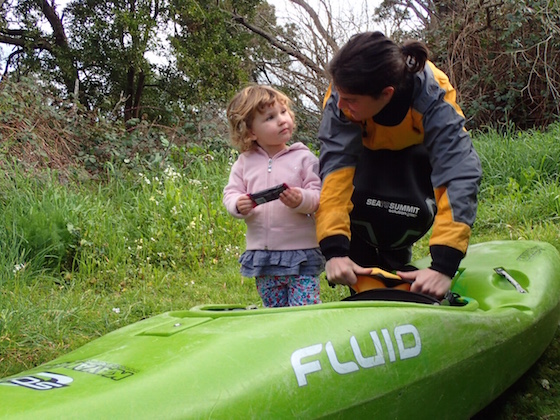 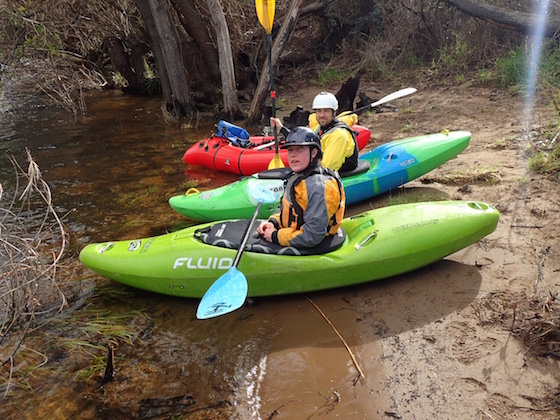 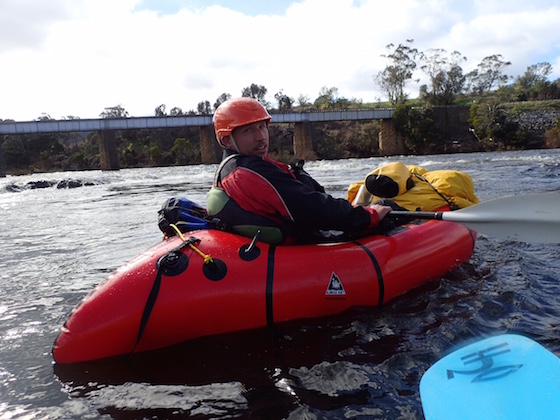 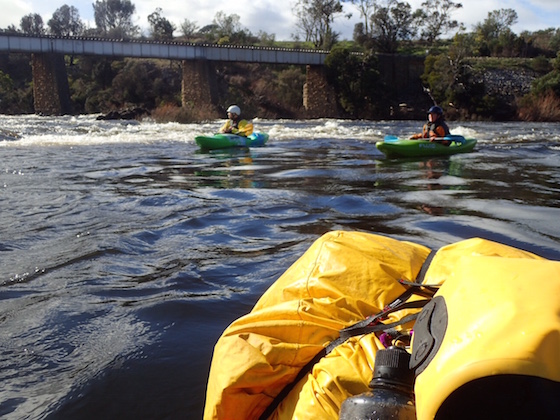 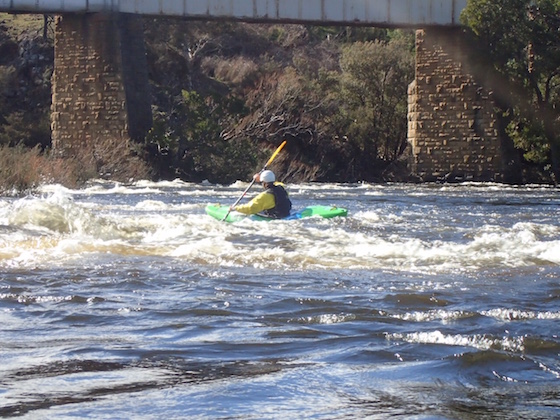 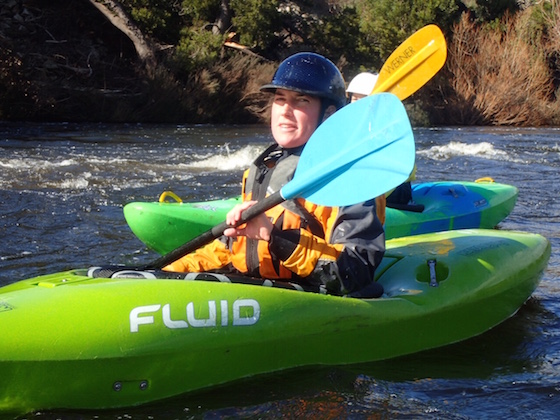 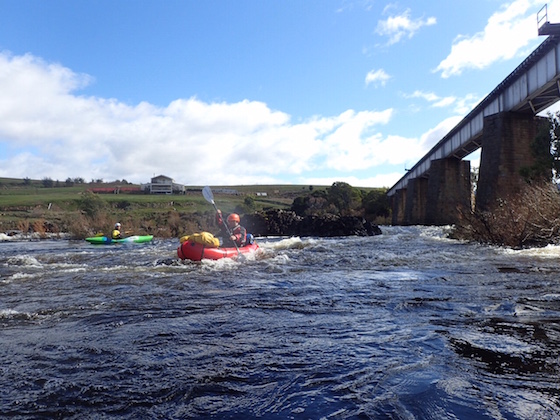 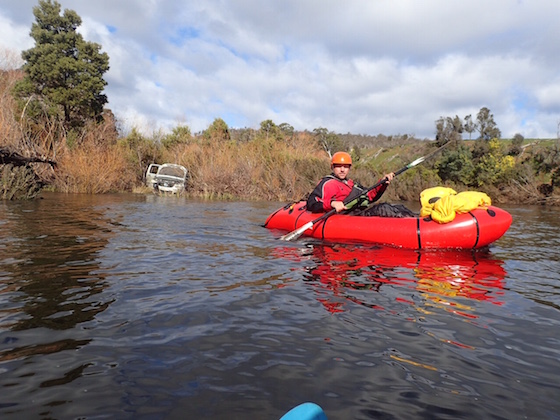 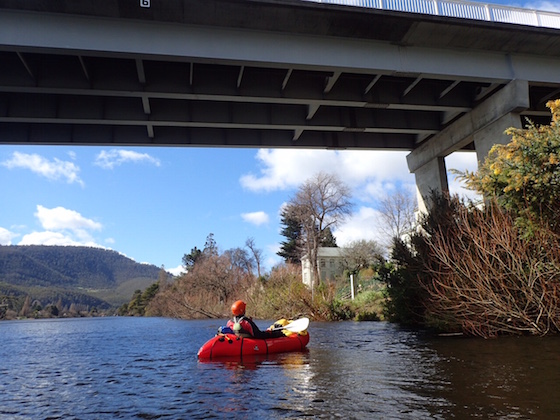 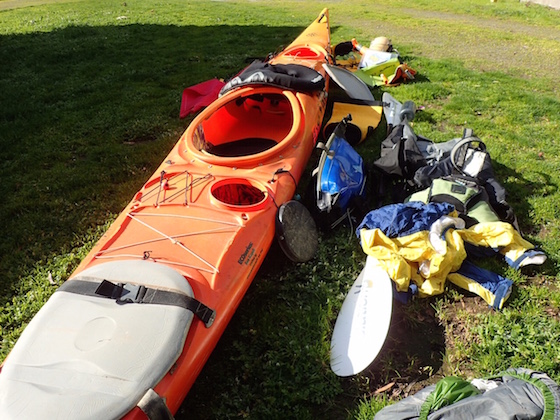 The changes on the river have come quickly over the past few days since the first sighting of a paddock. I woke up this morning with the hum of the highway traffic around the next river bend and the buzz of a chainsaw getting to work somewhere over the hill. I floated out onto the main current and drifted along with barely a paddle stroke until the point where the river buts up against the Lyell Highway. Here I was meeting Nic (my wife and expedition coordinator extraordinaire) and Sam (paddler and river enthusiast) to make the journey down to New Norfolk a team effort. My parents came up with a couple of extra little helpers who I haven't seen for a while. The littlest helper was so excited to see his dad with fuzzy facial hair that he cried. Hope (pictured) thought it was too cold to come on the expedition but maybe another time.

Our party of three set off though a rapid called broken bridge. It looks like the buttresses of a train bridge that has collapsed, leaving parts of the bridge poking up across the river. The water level has dropped a lot in the last few days and it was a smooth trip through. Down further we raced under another train bridge but this one hasn't fallen over yet. Nic and Sam enjoyed playing in the current and using their kayaks to dart across from eddy to eddy behind the rocks. Dave the Ruby Currant was more cautious as he wanted to keep our record of staying upright intact.

This river flooded 2-3 meters higher than current levels a few months ago and the debris in the trees along the bank is frightening. There's even a car in the river but I'm not sure if the flood did that? The houses along the river became more common and then we were in New Norfolk and pulling up at the caravan park. Nic and Sam left me with my kayak and took Dave the RC away. Sad!

Although the water is still mostly clean there is the usual evidence of urban life with plastic bags and odd bits of rubbish caught up on the riverbank. All drains lead to the sea eventually. A new animal the last few days is the pied cormorant. And thanks for the info on the Spotted Hand Fish, tomorrow I'll be entering the estuary and the last few days of the expedition.

... There was a possible way over the rocks, although it was a very difficult and dangerous way. Then round the corner, perhaps a quarter of a mile from where we had left the canoe, our hearts sank. This seemed the end of all things. Sheer cliffs on either hand, a roaring torrent plunging over a fall at least 30ft. high and beyond, stretching out of sight round the corner, the river running between cliffs 50 feet high that dropped sheer into the water. We seemed to be trapped. Whilst my companion sat down to have a look at it I went off through the dense growth at the side to see if there was any chance of cutting a track and portaging the canoe overland, but a good inspection satisfied me that it would be a week’s strenuous work to cut a track and put the canoe round the edge. There was only one way out, and that was straight ahead over the cliff...

She went over nicely, and floated in the pool below, after which I climbed round the cliff past some dense scrub that grew in a corner, and Stan, threw me a stone to which a fishing line had been tied. With the line I hauled over the rope attached to the canoe, and was able to work her along to a place some distance down the gorge, where we both climbed down into the canoe. In lowering the gear over the cliff into the canoe the tucker bag slipped out of the sling, and went floating away down the river. It contained half a loaf of bread, some bacon, and flour, and we fortunately recovered it about half a mile lower down, where it had been stranded in a rapid... It was ten days later that we finally emerged from the gorge, I hope, wiser, and certainly thinner, men.

On Friday this week we will be giving away the Royal Life Saving Society's generously donated swimming lessons ($160 worth). To be in the running get posting on the discussion boards - everyone's in for a chance.