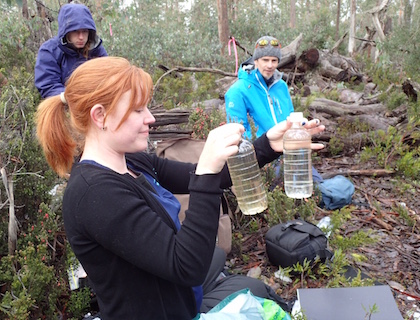 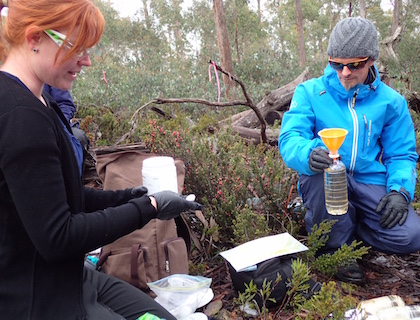 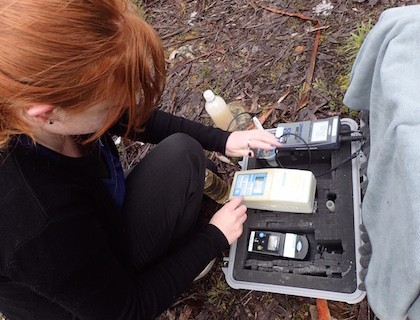 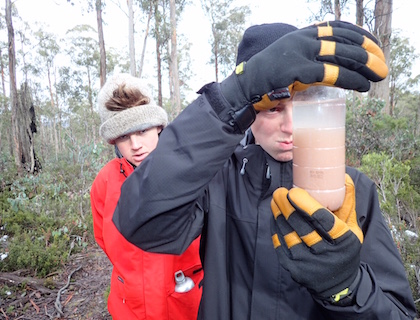 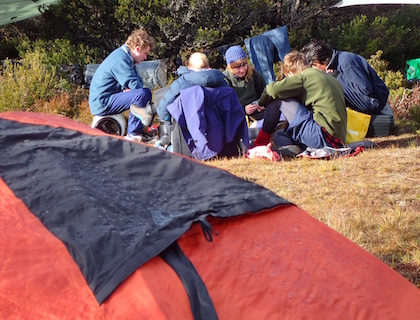 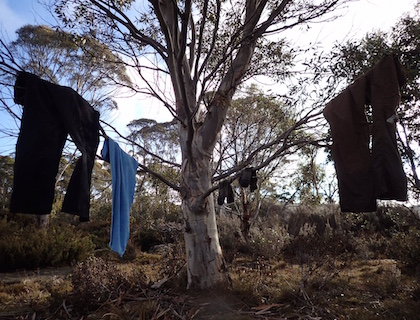 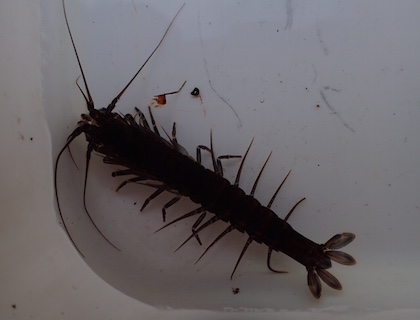 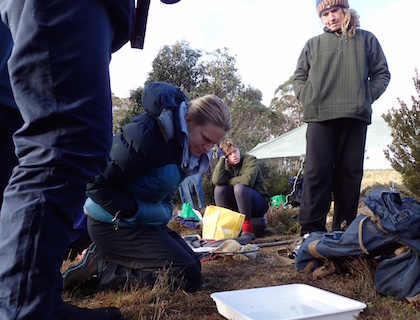 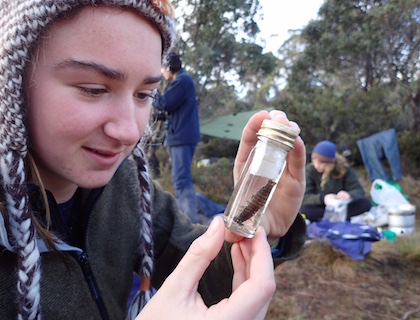 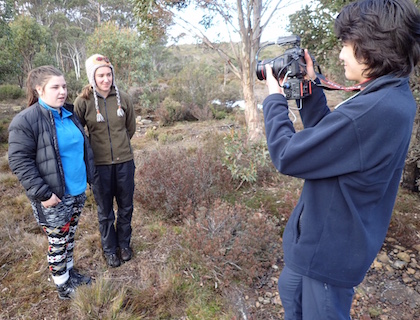 Anyone who left their boots outside the tents last night awoke to frozen laces as the temperature dropped to -1 degrees. But we couldn't sit around waiting for them to thaw out because Kate and John from Taswater were making a mighty effort to join us for some water quality testing. Taswater are responsible for supplying safe drinking water to many Tasmanians. If you're from other parts of Australia you probably have a similar organisation that makes sure you don't get sick from drinking the water that comes out your tap.

Kate and John were part way in to out basecamp when we found them on the track. John took a mobile water testing kit out of his backpack. Kate had brought water samples in bottles from the Huon River, lower down the Derwent just before the water treatment plant at Bryn Estyn and also form the creek just down below us, called Broken Leg Creek. The testing kit measured temperature, pH and turbidity. Broken Leg Creek was 3 times less turbid than Bryn Estyn and 10 times less turbid than the Huon River sample. But the recent heavy rains in Tassie have stirred up a lot of sediment and washed a lot of dirt and muck into the lower parts of the rivers. Having lots of bush around us here helps keep the water clean as it doesn't let the dirt get washed in. We also looked at how adding aluminium sulphate (alum) to dirty water cleans it up by making the dirt stick together so it falls to the bottom. It's part of the process they use at the water treatment plants before it reaches our taps. Thanks Kate and John for the extreme classroom visit!

After lunch Dr Alastair went on a solo mission with his net and returned with something very special... a stunning little mountain shrimp (Anaspides spp.). Zoologists from around the world are completely fascinated by our little mountain shrimps because they are thought to be very similar to early crustaceans that lived 50 million years ago. It might be a species of mountain shrimp that is found in Lake St Clair or it might even be a completely new species that has never been found before! If so, we thought we should call it Anaspides alastairii in honour of Alastair finding it. But we were told that it's very poor form to call new species after yourself. Maybe something like  Anaspides expeditionclassii?

After the excitement died down Paul and Charles interviewed Oscar, Yasmyn, Chloe, Jarra and Huon for the Derwent Estuary Program sponsored documentary. It's going to be a classic, no matter what happens for the rest of the expedition.

Another bird we saw today was the Black Currawong. It had a large black body with white tips and a strong beak. Great to read what you all find at your schools.

River safety tip of the week from the Royal Life Saving Society:

It is important to take care when walking on slippery or uneven surfaces around or in water. Conditions should be checked before entering the water slowly, feet first. Avoid submerged obstacles, such as tree branches and rocks.

There are some common themes running through the discussion board at the moment so I thought it might be good to give you some answers here!

Platypus - We saw a platypus on the lagoon last night. It surfaced a long way away but was prob eating little insects from the water.

Alastair collecting - Alastair says you need a special permit and a very good reason not to collect native animals no matter where you are. In a national park it's extra important because these are places that are set aside to look after landscapes and the plants and animals that inhabit them.

Pack weighs -My pack is about 25kg which is heavy. I wish it was lighter but I need a lot of extra gear to get these reports to you!

Obstacles - All the water in the creeks and rivers is going to be a challenge as I walk towards the cirque next week.

Cairns - We only saw the one cairn so we think it marked the end point of someone's exploration here. There are signs of old Hydro Tasmania activity with the rough track up, some broken cable left near a tree and a small Alan of concrete near our camp? Anyone know more about who and why these things would be here?

No snakes yet - Too cold.

A great week on the discussion boards this week. Keep your questions rolling for our experts via the CONNECT page and for Andrew via the daily discussion page (click on DISCUSS above). Next week we'd love to hear about the work your doing in your classroom. Try to upload some to the discussion boards where you think it's relevant. Good luck!